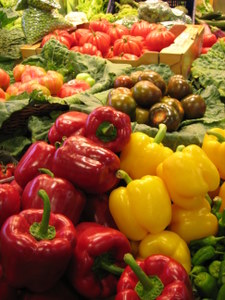 After multiple patients and colleagues asked me to weigh in on the new documentary “What the Health?” I felt compelled to watch and give a review. Knowing it was pro-vegan I was reluctant but thought I would do so with an open mind.

Filmmaker Kip Anderson goes though the evils of meat and dairy quoting various studies, interviewing experts, and visiting various organizations to ask questions about why they are recommending meat/dairy given the statistics he quotes regarding studies.

He methodically cherry picks biased studies that support his ideas about cancer and the connection to meat/dairy.  His arrogance throughout the documentary is irritating, particularly when he phones companies and asks the person who answers the phone (most likely a volunteer) why they are recommending meat or dairy. He discusses how various health organizations take money from food manufacturers, a conflict of interest which has unfortunately been a practice for years.

The experts he interviews are all in agreement of being vegan and the evils of meat and dairy.  The 90-minute documentary uses the same group of individuals going back and forth on how going vegan will revolutionize your life. He uses the physicians who were a part of “Forks over Knives,” a similar film advocating a vegan diet.  These experts go on record stating that consuming meat and dairy lead to multiple health issues and the need for medications. For validity a solid debate needs to examine both sides of an issue and this is not addressed any time in the film, but rather a barrage of one-sided opinions.

One study in particular he quotes is that processed meat is linked to cancer. While I am not a fan of eating processed meats on a regular basis, consuming occasional bacon or a hot dog is not going to kill anyone. This review by my colleague Albert Fuchs, M.D. puts it into perspective.

The study he quotes on eggs yolks linked to smoking was a poorly done study and was quickly criticized by most health experts as ridiculous and irresponsible. Stating that a high sugar high starch diet does not lead to weight gain and diabetes has been continually disproven by multiple studies. So he’s saying you can have the jumbo bucket of popcorn and sugary coke with no ill consequences – not!

Showing people taking multiple medications and blaming weight, health and other issues solely on consuming meat and dairy is just irresponsible. He has a few subjects who went on a vegan diet for 2 weeks who state they got off all medication with just this change. There was no blood work shown or other sound medical documentation showing the validity of this 2 week experiment. Towards the end of the documentary there was a resounding message that every aspect of your life will improve if you become vegan leading to health and happiness.

If there were more balance in interviewing those on both sides of the argument, it might have made the film more believable, as was in the case of “Food, Inc.”

Walter Willett, MD, who is the head of nutrition and epidemiology at the Harvard School of Public Health states “fat is not her problem.  If Americans could eliminate sugary beverages, potatoes, white bread, pasta, white rice and sugary snacks, we would wipe out almost all the problems we have weight weight and diabetes and other metabolic disease.”  A search on pubmed.com (the largest search engine for research studies) shows he has conducted and was on the research team for over 1000 studies. I wonder why he was not interviewed?

The truth of the documentary:  the food industry needs a major overhaul in how they treat animals and health companies that take money from food manufacturers is a conflict of interest.  When animals are raised in terrible conditions, fed corn, soy and antibiotics it does increase our risk of inflammation, gut issues and disease processes.

The Western Diet of high sugar and starches is causing diabetes, heart disease, fatty liver, etc.  If we consume whole foods, less processed foods, organic grass-fed dairy and meat products the risk of disease is quite low. We do need to consume more vegetables, salads, and fiber to lower risk of cancer and heart disease and if you combine that with responsibly raised meat/poultry/dairy your health and weight will improve.

It was curious to me that the documentary did not address the differences in metabolism – and it was just one size fits all. Since we all have different DNA our bodies metabolize food individually and the balance of one person’s diet needs to be different than another.

I have to wonder how Siskal and Ebert would review this film for balance? As always, my weigh in is being “flexitarian” is key and the balance of food choices and nutrients one consumes needs to be tailored to your genetics, blood work and lifestyle…and that cannot be found in any documentary, or cutting a whole food group out of your diet.